URL for this press release: https://www.angelaengel.com/charters-dont-spell-choice/

DENVER, CO (January 30, 2015) – Counter protesters gathered Monday in front of the state Capitol building to challenge the takeover of neighborhood schools by Charters. Their message was simple, since the charterization of neighborhood public schools, students and families, the majority of whom attend neighborhood public schools, have fewer choices. Senator Michael Johnston, who joined Senator Owen Hill as the legislative face at Monday’s Charter School rally, instituted the PARCC test as the state’s standardized test and tied teacher’s salaries to test scores in Senate Bill 191. “Common Core, PARCC and the high-stakes of performance pay and school labels have taken away choice for students and parents in public schools,” said Anita Stapleton a parent who traveled 130 miles to attend the event.

Protesters to Monday’s “CHOICE” rally included urban, rural and suburban parents from public Magnet schools to parents so frustrated by the lack of legitimate choice that they are homeschooling. Republicans and Democrats are coming together to advocate for the rights of parents and students to Opt Out of these one-size-fits-all reforms.

The intended message of Monday’s Rally was “school choice is working for Colorado families”. Children’s advocate and author Angela Engel says that is not true for most students. “In the last decade the number of students identified as “at-risk” has doubled and many schools have poverty rates above 80%.

“The charter movement is generating billions of dollars in private profits. Efforts to divert public dollars to private interests have resulted in re-segregation and greater inequities in our education system,” said Engel. Many reports including, “Schools Without Diversity” have shown that the growth of Education Management Organizations and charter schools contribute to gentrification of neighborhoods and racial stratification.

Quality also remains a concern. A 2014 national study published by the National Education Policy Center demonstrates that while K-12 online learning is growing exponentially, “full-time virtual schools continue to have serious problems with respect to education quality, diversity, and accountability.” Across all measures of student achievement, virtual schools perform significantly and consistently below traditional schools. Eve Cohen, a parent from one of Denver’s magnet schools said, “Our community schools are being starved and simultaneously strangled with the burdens of too much testing and not enough opportunities for students to direct their own learning.”

Photos from Monday’s protest can be found here: 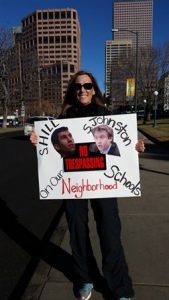 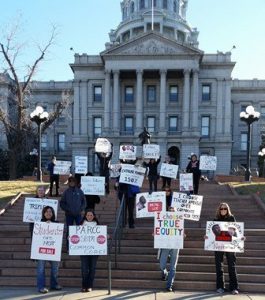