She was accepted to the number one engineering college in the country. 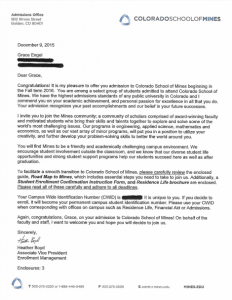 I first began advocating for Opt Out in 2000 when Senate Bill 186 passed the Colorado Legislature and my daughter, Grace, was three years old. Although she has participated in class assessments, she has opted out of every state mandated test including PARCC and CMAS.  SB 186 tied school ratings to test scores and shifted the value of education from individual development to collective test performance. While getting my masters degree in Curriculum and Instruction I was mentored under professor, Marie Wirsing, the leading author of  SB186-and-TruthAboutColoradoEdReform. Before her passing in 2004, she helped organize a coalition of educators to challenge standardized testing as a means to accountability. This report provides the historical reference and remains for me the most significant document in understanding corporate driven Education Reform.

In many ways, Colorado along with Texas and Florida, was the birth place of high-stakes testing. We were the first in the country to pass performance pay for teachers and passed the READ ACT, similar to Florida’s retention plan for third graders who do not “pass” the tests. It’s important to remember the initial reform efforts followed on the heels of a state voucher initiative deemed unconstitutional in the state Supreme Court. Here in Colorado, SB 186 was retaliation by high powered corporate interests bent on sustaining a white male power structure. Standardized testing was never intended as a means to improve public education or enhance the learning of children. It was intended from the inception as a means to discredit educators, to undermine public neighborhood schools and to direct tax revenue to private interests for increased profit. For those who could not see it then, I hope you see it now and take action.

This fall, Grace, now eighteen will be off to college. She is well prepared, self-directed, and still loves learning.

A lie can travel halfway around the world while the truth is putting on its shoes. – Mark Twain